The subject of the Iconostasis of Connectivism revolves around the interconnected modern world, and the impact of these new digital technologies on our everyday lives.

In the upper middle part we have a symbolic Octopus-like creature, gathering info for the supposed purpose of protecting the public and national security. Programs like Prism were used for such data gathering, and that data was then used in various predictive algorithm programs- infamous for their inherent bias- such as Palantir. Flanking left and right we can see stereotypical representations of Liberals (symbolically riding a Snowflake) on the left, and Conservatives (symbolically riding a gun-hand) engaged in unending heated on-line debates, garnering wows, likes and loves from their followers.

The middle part showcases the monetary interconnectedness of IT firms and banks. Results of their activity is the creation of speculative economic and financial bubbles, ending with recessions and a financial crisis. Behind a wall protecting the metaphorical West is the world in constant turmoil, wars and disasters. We can also see the symbolic representations of a Millennial ensnared (crucified) in the virtual world, surrounded by the representatives of the Y generation caught up in activism, low paying jobs, debts and internships, tech-savvy and hopeful, but with generally bleak life prospects. The data they create by using their smartphones and credit cards is the true power of the modern world. On the right side we can see people piling up debts, working slavishly until they are finished and “recycled”. On the left there are people voluntarily giving up on their humanity in favour of cybernetics (Singularity), reducing their thoughts and emotional patterns to emojis. Binary codes, signs, posters and various brand symbols add another hidden layer of meaning to the respective scenes.

The lower part shows a symbolic representation of Steve Jobs, creator of the main privacy-invading, data gathering device of today. Flanking them on the left and right are symbolic representations of Putin and Trump, which slay a symbolic dragon (H. Klinton) in a reference to the scene of  St. George slaying a dragon. Both are carried on a joyful wave (rainbow) of social network reactions. Putin is seen riding a bear (Russia) while Trump rides Casper the ghost (white supremacy).  This scene is a reference to the detrimental effect of marriage between fake news and social media. 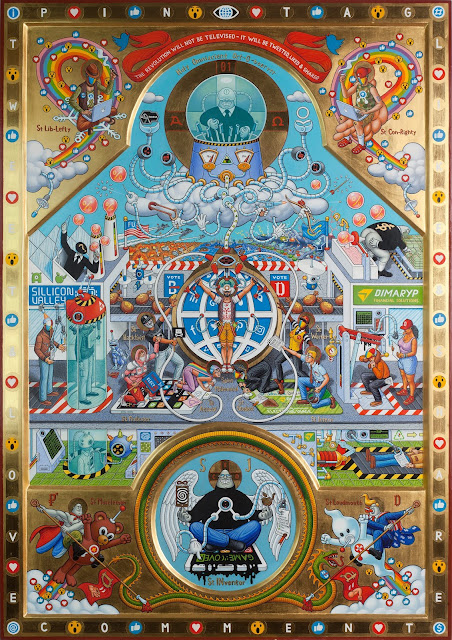 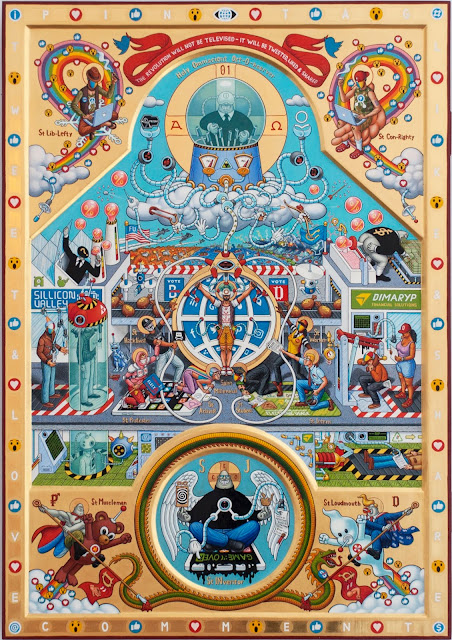 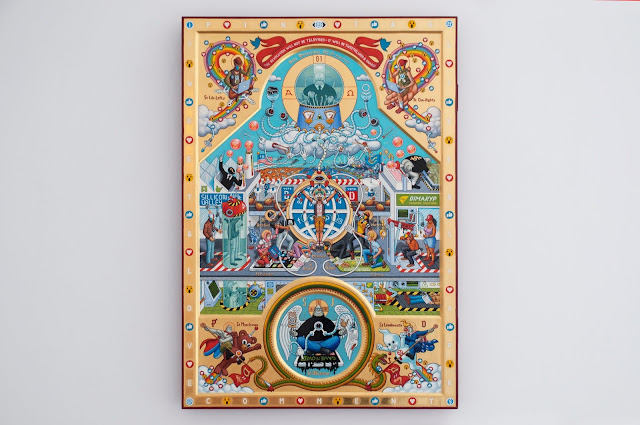 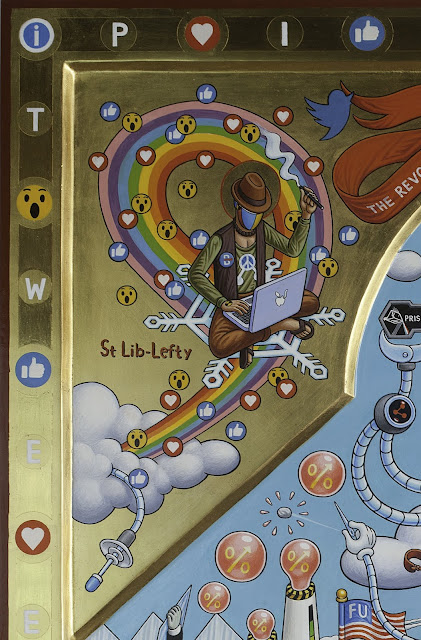 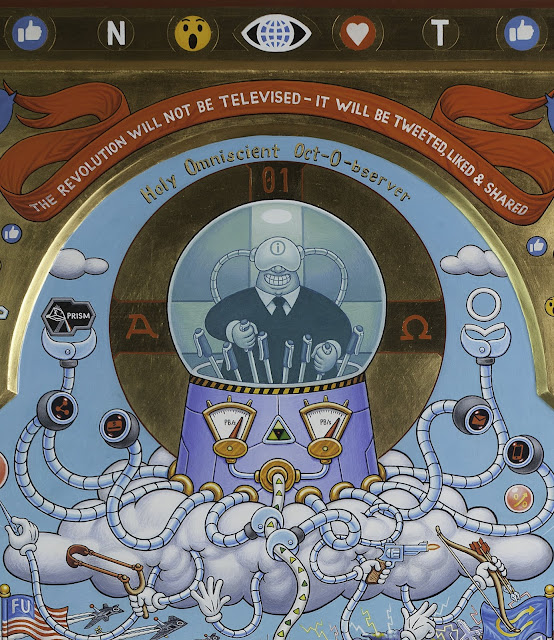 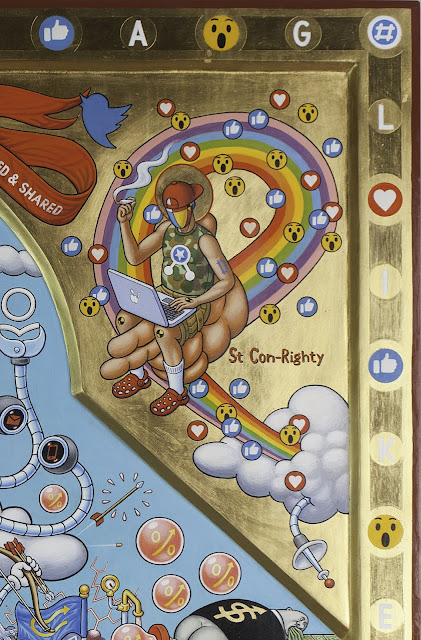 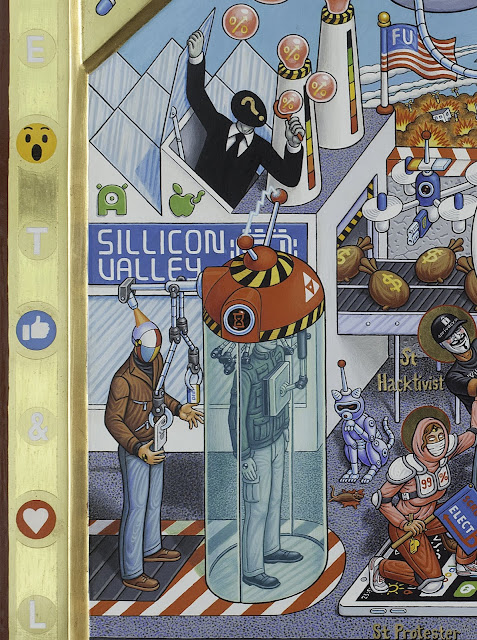 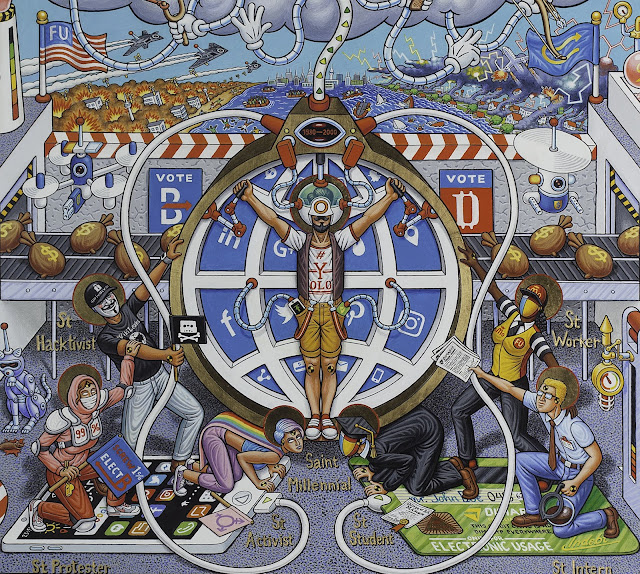 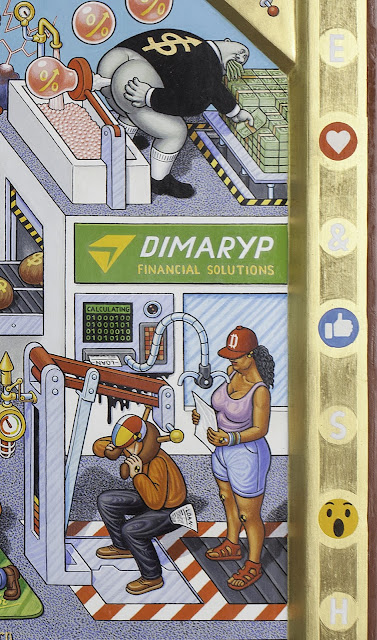 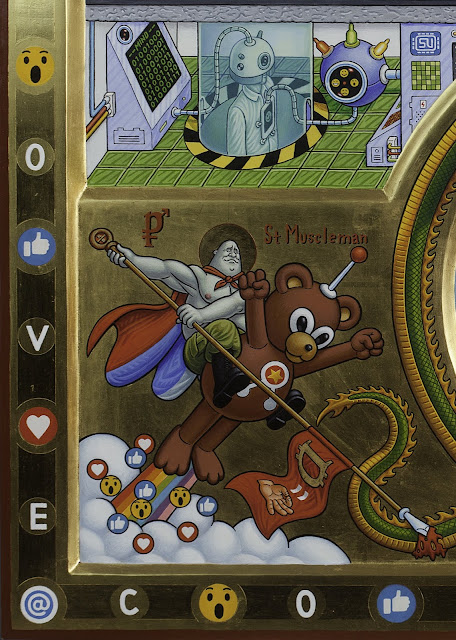 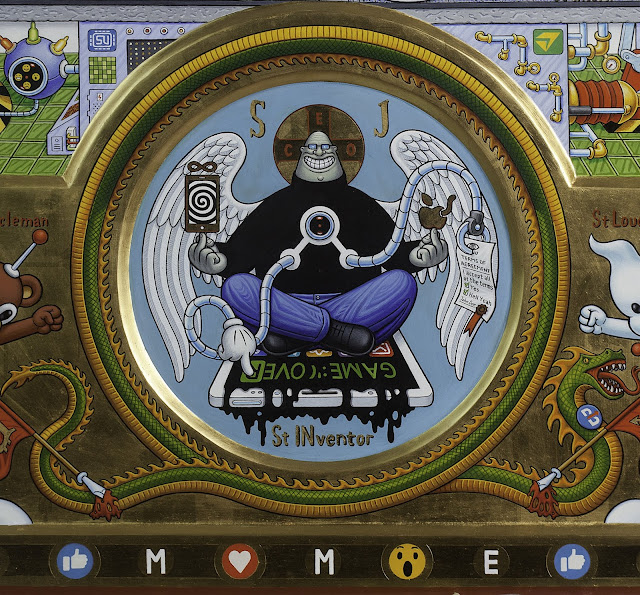 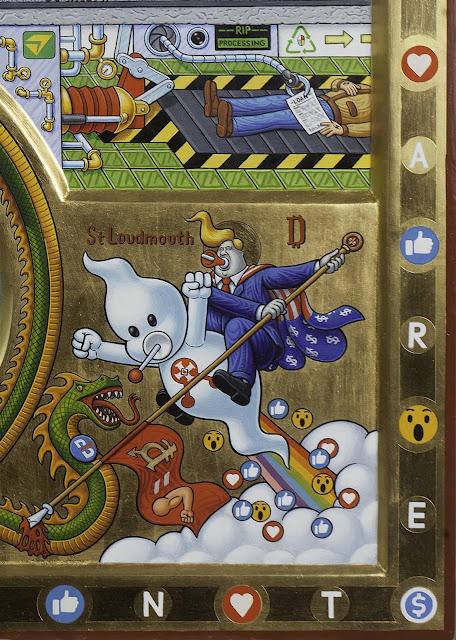